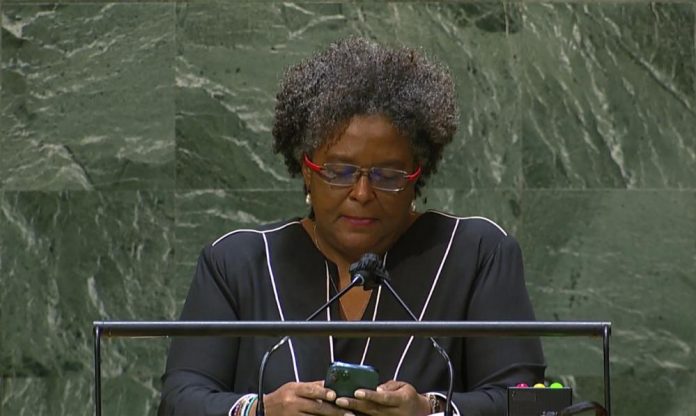 While Mia Amor Mottley, the Barbados Prime Minister, didn’t use her phone to deliver Friday’s speech at U.N. General Assembly — she did appear to have an iPhone in her hand as she delivered passionate remarks to other world leaders.

Mottley, who was elected prime minister of the Caribbean nation in 2018, spoke energetically, and seemed to be out of her element. She also used vivid lines that were not included in the prepared speech uploaded by the U.N. Website.

“If I use the speech that was prepared for me to give today, it will be repetition. It will be a repetition of what you’ve heard from other people and from me.” That prepared statement said.

Although the General Assembly hall has a teleprompter available, few leaders use it. Most prefer to use paper speeches. Although reading speeches from smartphones is becoming more common, it’s still rare at the General Assembly. El Salvador’s president pulled one out of his phone in 2019 to take a selfie mid-speech. ?

Mottley began to rattle off a series of rhetorical questions that challenged the audience about a range of topics, including vaccine inequity and climate change. She also asked them to address digital regulations to prevent fake news. At one point she invoked Bob Marley and asked: “In Robert Nesta Marley’s words, who will stand up and get up?”

She remarked, “If we can send people on the moon and, as I have said over and over again, solve malebaldness,” then other issues can be addressed.