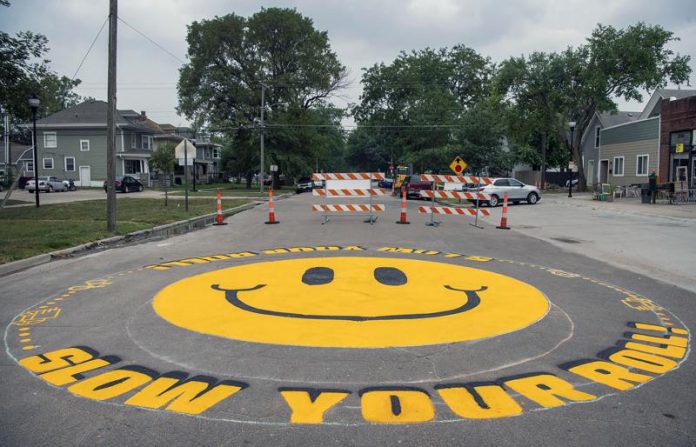 One neighborhood in Lincoln that is prone to speeders has put up a huge yellow sign reminding drivers to slow down.

Residents of the South of Downtown neighborhood painted a street-sized smiley face on the pavement of 11th Street with the phrase “Slow your roll,” according to the Lincoln Journal Star.

Kat Weise, South of Downtown Community Arts organizer, stated that “this was just a low-hanging way we could try and slow traffic.”

As a neighborly reminder, residents painted the faces over the weekend. This project was inspired by a July 21 accident in which a boy was struck by a car on C Street. Pepe Fierro (a local restaurant owner) said that while the boy was not hurt, some children in the neighborhood no longer feel safe biking in their own neighborhoods.

Fierro stated that he and other residents of the South of Downtown have been asking for more security measures. There are no stop signs from A to K streets. The only roundabout is one, which Fierro said is so low that people drive right through it.

This is made worse by the presence of Everett Elementary School in the vicinity, which increases the number young pedestrians in this area.

Weise stated that she and others would love to see more crosswalks and street signs, and to have the speed limit dropped from 35 to 25 mph. However, the mural will help to slow traffic until the city solves the problem permanently.

Weise stated that the mural also has other benefits. She said that 40% of the neighborhood is public space, and 94% of residents rent their homes to live there, so public art created by the community can foster pride and ownership in the area.

While there is excitement over the potential to improve the situation, Weise stated that the city must make the changes as soon as possible.

She said, “I don’t want to see another child get hit by cars because we failed to address this quickly and efficiently.”