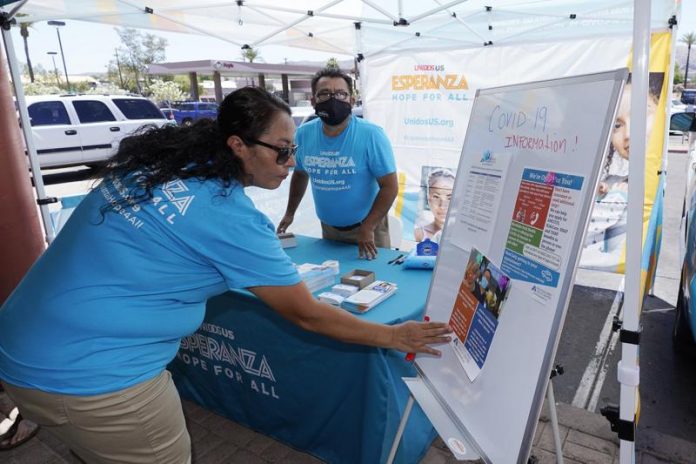 According to a Pew Research Center study, many Latinos feel that they are now better off financially.

The study, published Thursday, surveyed 3,375 Latinos living in the U.S. during March. This comes at a time when coronavirus infection rates are increasing in the U.S.. This study confirmed what many have reported since the pandemic hit in early 2020. It found that Latinos experienced job losses, high rates of infection, and deaths. According to the Centers for Disease Control and Prevention, Latinos are twice as likely as whites to die from COVID-19.

Over half of respondents said that a close friend or family member had died or been hospitalized from the coronavirus. Many people work in jobs that require them to interact with the general public.

However, only half of respondents said they are optimistic about the future. 65% also said that the worst pandemic was behind them, compared to 23% in April 2020.

Notably, Latinos (especially those without lawful permanent residency) experienced high rates in job and wage losses at the start of the pandemic. However, they are now starting to recover. In June, the unemployment rate for Latinos was 7.3%. This is a significant drop from 18.5% in April 2020 which occurred just after major shutdowns.

In April 2020, Latinas had the highest rate of unemployment among all groups at 20%. Although many Latinos are starting to rebound, it is Latinas that have struggled to regain their footing.

Jens Manuel Krogstad was one of the study’s co-authors. He said, “The economy is expanding and the economy’s growing quite quickly, so it’s possible that the financial position of Latinos will improve. We did find that around half of Latinos expect their financial situation and the condition with their family to improve in the next year.”

Krogstad stated that his team wanted to examine how Latinos are doing one year after the pandemic. They had seen high unemployment rates and health disparities in the past year.

Krogstad stated that “Latinos confirmed this in our survey, but we also dug deeper.”

According to the survey, Latinos have helped their relatives and friends financially even though they are facing hardships of their own.

Nearly two-thirds (63%) of Latinos reported that they sent money or helped friends, family, or charities.