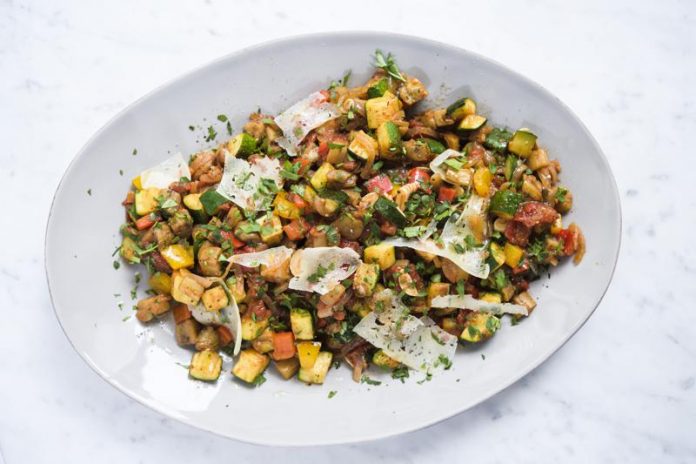 Joaquin Felipe, the chef of Florida Retiro in Madrid, introduced us to pisto manigego. This colorful combination of summer vegetables and sauteed mushrooms is Spain’s answer for French ratatouille.

Each ingredient was still intact, and the fresh flavor of the vegetables was evident. Finely chopped bell peppers were added, as well as tomato, onion, eggplant, and zucchini. Good olive oil’s fruitiness acted as a binder, but it didn’t make porridge too greasy. This dish was more than a side dish. The buttery, grassy flavor from the curds of manchego cheese made it stand out. Simply delicious.

We recommend topping the recipe in “Milk Street Tuesday Nights” with a poached egg or fried egg to make a quick and tasty main dish.

Because of the rich tomato juices, crusty bread is almost a must. However, this dish would also go well with rice or baked potatoes. Although we liked the combination of one red and one green bell peppers, you can use either one or both. The seedy center of the zucchini should be left out. It will become soft and mushy when it is cooked.

It was a lesson in contradictions. It’s simple, but it’s trendy. Not oily, but oil-infused. Simple and delicate, yet simple. A good pisto mango should be.

From start to finish: 40 minutes

Tomatoes in a 14-ounce can

Cut off the ends of zucchini and then slice it lengthwise into planks. Set aside the cut zucchini planks in 1/2-inch cubes. Toss the eggplant in a medium bowl with 1/2 teaspoon of salt and 1 teaspoon pepper.

Heat 6 tablespoons oil in a Dutch oven on medium-high until it shimmers. Cook the eggplant in an even layer. Cover and reduce heat to medium. Cook stirring until tender, but not falling apart when pierced using a fork, about 3 to 5 more minutes. Transfer the mixture to a medium bowl lined with paper towels and place it aside.

Add 1 tablespoon of the remaining olive oil to the pot and heat on medium-high until it shimmers. Cook the zucchini in an even layer for about 4 minutes. Stir the mixture and continue to cook for 1 to 2 more minutes. Transfer the eggplant to the bowl using the slotted spoon.

Add the remaining oil to the pot and heat on medium-high until it shimmers. Add the onion, 1/2 teaspoon salt and cook until it is tender. Stirring occasionally, cook until golden brown, about 3 to 5 minutes. Add the bell peppers and 1 teaspoon salt to taste. Cook, stirring, for 3 to 5 minutes. After about 30 seconds, stir in the oregano and cumin. Mix in the juice of the tomatoes. Cover and cook on medium heat for 5 to 7 minutes.

Reduce heat to low, and then stir in the mixture of eggplant-zucchini. Cook for 1 to 2 minutes or until the mixture is heated through. Add the parsley to the mixture, and season it with salt and pepper. Transfer the mixture to a platter. Top with the manchego.