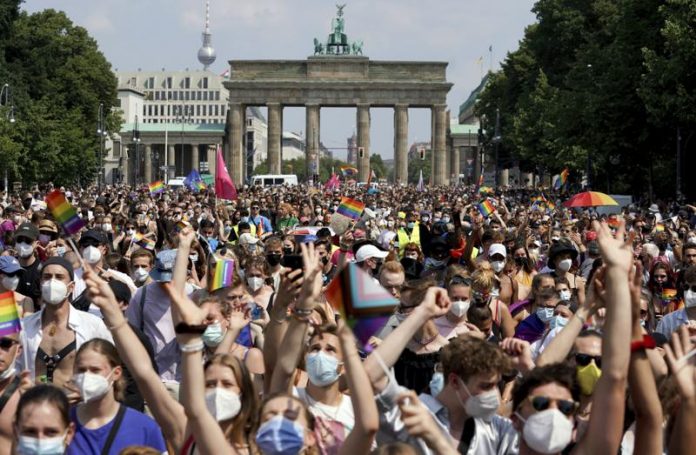 On Saturday, around 65,000 people marched in support of LGBTQ rights at Berlin’s annual Christopher Street Day celebration. This was three times more than expected.

This was the largest demonstration in Berlin since the outbreak of the coronavirus pandemic.

In response to the increasing safety of gays and lesbians living in Hungary and Poland, Klaus Lederer, Berlin’s senator, called for a “queer-free zone” to be established in Berlin.

Parts of Poland have declared “LGBT-free zones”, while Hungary has recently passed a law that prohibits the portrayal of homosexuality or gender reassignment of minors. This discriminatory legislation was denounced by human rights groups as discriminatory.

Lederer stated that the current situation in the EU member states “sends chills down my back.”

He also mentioned that the pandemic was particularly difficult for gays and lesbians in their homes, as many shelters were shut down. He stated that “there is still much to be done.”

Martin Dams, a police spokesperson, initially stated that 35,000 people participated in Saturday’s parade. However, this number was later revised upwards by The Associated Press. The organizers put the number at 80,000.

They were expecting about 20,000 people, despite social distancing rules that ban alcohol and prohibitions on alcohol to reduce the risk of new coronavirus infection.

Due to the pandemic, there was no parade this year. However, many people took advantage the sunny weather and low rates of infections to participate in the last major celebration of Berlin’s Pride Month.

Nearby, the United States Embassy flew a rainbow flag underneath the American flag.

Five trucks led the parade, which was spaced apart so that demonstrators had more room to dance past Brandenburg Gate to techno beats. The organizers repeatedly asked revelers to wear masks and stay away from other people, but it was not always possible due to the sheer volume of people.

A homophobic attack on a couple of males in Berlin’s subway station late Friday preceded the celebrations. Police say the two men were sitting on a train and were confronted by a stranger. He then insulted the men and punched one of them several times. After fleeing briefly, other passengers intervened to stop the stranger from attacking the men.

Friday’s service at Berlin Marienkirche saw Bishop Christian Stablein ask for forgiveness from the LGBTQ community in regard to the suffering they have suffered because of the evangelical church.