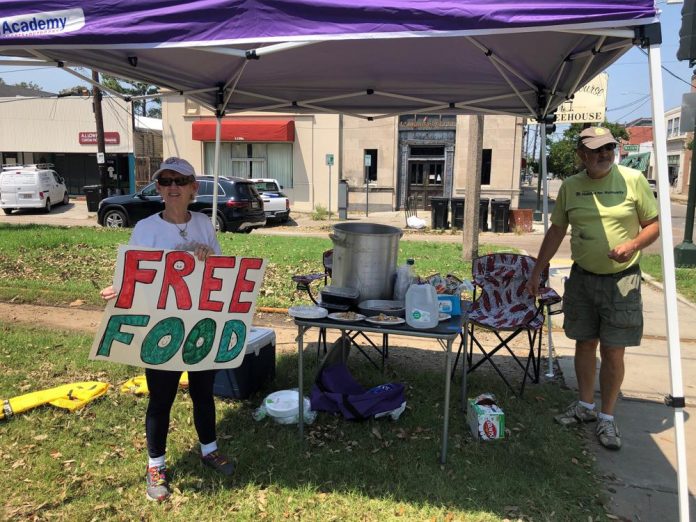 Breakfast on El Pavo Real’s sidewalk is shrimp and grits. The Live Oak Cafe offers “Super Secret” seasoned pork with braised greens. A couple just wanted to help and set up a canopy on the streetcar tracks that overlooked the sun-scorched streets. They served spicy jambalaya.

In a city where lunchtime conversation is almost always about the dinner menu, where camaraderie thrives over Monday plates filled with rice and beans, the neighbor is bringing the hearty food to the table.

New Orleans residents are able to help one another in times of need by sharing their food. It was the same after Hurricane Ida when homes were flooded or destroyed and trees were uprooted, causing the city to lose its power grid.

Jay Banks, a City Council member and one of many people from the Israelites Baptist Church, said that “in times of crisis…we all join together.” He was among several who distributed donated goods to the Central City low-income community on Thursday.

New Orleans’ problems mirror those of many other cities in America. There are disconcerting bursts and ingrained poverty as well as a lack of affordable housing for the needy. Add to that a poor drainage system in one the rainiest American cities and you have a disconcerting vulnerability to hurricanes as climate changes contributes to more severe storms. It is easy to forgive anyone who wishes to leave and move on.

Some do. Over the years, the population has declined. Many people stay here, not only those with limited means to move. They do this to preserve beloved neighbourhood traditions such as jazz funerals, second-line parades and “social aid and enjoyment clubs” that date back centuries.

Broadmoor Improvement Association is the project behind the garden. It was established in 2005 to preserve the neighborhood of Broadmoor, a working-class area.

Not only were those who are skilled in cooking able to provide relief, but also others with food skills.