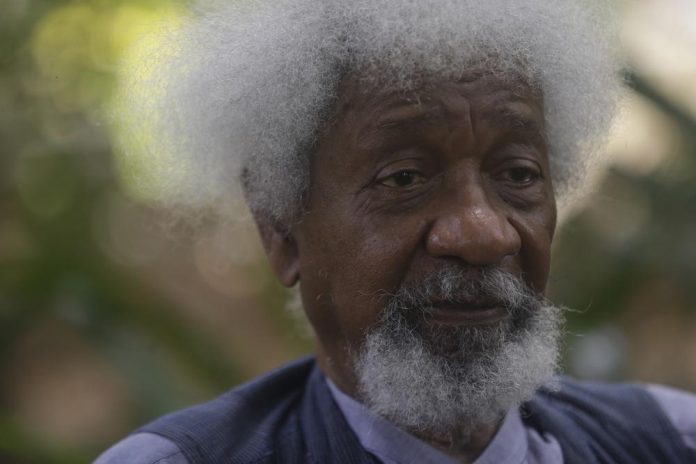 LAGOS  — WoleSoyinka is a Nigerian Nobel-winning author who sees the country’s many problems, including violent extremism, systemic corruption and kidnapping bandsits. But he doesn’t despair.

He believes that Nigeria’s youth, at 87 years old, may have the ability and know-how to bring the troubled nation back on its feet.

According to Soyinka, the new generation will have to decide “whether they want to continue along the same chugging single-track train” or chart a new course.

Soyinka attributes the efforts to reform Nigeria to young Nigerians, approximately 64 million of whom are between 15-35 years old and more than 200million people. He refers to the #EndSARS protests in Oct. 2020 against police brutality and compares it with the “positive watersheds for resistance” that occurred during Nigeria’s nearly 30-year-long military rule.

Soyinka believes that the youth can achieve change even though the protests ended last year with the shootings and deaths of over 30 people.

He said, “The kind and amount of energy and intelligence that created #EndSARS is one, for example, that can be used to engage masses of people on a larger scale.”

Soyinka’s first novel in almost 50 years, “Chronicles from the Land of the Happyest People on Earth,” was published in September. It features a fictional Nigeria that is rife in crime, corruption, and chaos, with a ruling party called the People on the Move Party. Despite the existence of an ironically named annual Festival of the People of Happiness, the population is far from happy.

The humorous novel shows a trade in human body part — by a company called Human Resources — and a pastor at a megachurch who preaches Chrislam, a mixture of Christianity and Islam. But Soyinka’s uncompromising portrait of Nigeria is mixed with a hopeful spirit.

Soyinka spoke with AP from the Freedom Park in Lagos about his views on Nigeria. Soyinka stated that he does not believe the current system of Nigeria is “working and productive”.

Soyinka supported Muhammadu Buhari as president and asked Nigerians for forgiveness. He was a former dictator who ruled Nigeria between 1983 and 1985. Buhari is now president, and Soyinka is critical.

The author spoke out about Buhari’s administration at 78 years old.

According to him, Buhari is known for “putting people into crates” when he disagrees with them. This includes separatist leaders Sunday Igboho, Nnamdi Kanu and currently held in Nigeria’s custody by the secret police.

Soyinka claims that Nigeria began to go in the wrong direction in 1955, when it started getting “unearned and not earned wealth” from oil.

“We didn’t make anything from oil, we just used the oil raw for what it was, sold it, and took the money and wasted it,” Soyinka said. He was also the first Black author to win the Nobel Prize for Literature in 1986.

He stated that “Productivity fell and the small economies which support a population… began disappearing.”

Despite the immense wealth Nigeria gained from crude oil exports, its people still struggle with poverty and underdevelopment.

Ten years after Nigeria discovered large quantities of oil, it suffered its first military coup, in 1966. This opened the floodgates to a series of dictatorships, which occupied Nigeria for almost all of the years, until 1999, when democracy was restored.

After leading pro-democracy protests, Soyinka was forced to go into exile during one of these military regimes, in 1994 under the late Sani Abaka.

Although it has been 22 years since Nigeria was re-elected to democracy, Soyinka feels that the country has not “really recovered” from its dictatorial past. He feels that many of the changes he fought to achieve are still not realized.

He said, “What we have again is reinventing of the wheel.” “Each ruler says to the people, “Oh yes, I am listening.” They want to change. Let’s get together and play with the constitution. Rather than digging deep and trying to create a completely new society. It’s the same outcome once they are elected to power.

The northeastern part of the country is still under siege by the Islamic extremists of Boko Haram, and their offshoot, the Islamic State West Africa Province. This 12-year-old war against extremists continues. Banditry that led to the abduction and killing of many, including schoolchildren, continues in the northwest and central US. Meanwhile, in the southeast, a separatist movement is emerging.

Soyinka believes things would have been different had leaders not pretended that what was going on was a “blip on the screen”, when it was actually happening deep within the society.

They refused to act at the right moment. They made concessions. They were appeased. They allowed themselves to be excused. They even exaggerated the danger and the reality. He said, ruefully, and his face became solemn.

“So, every time we point the finger at the state, those in government look at us and see ourselves as a reflection on the rest of society. Pot calling the kettle black. They say, “Come and chop small.” We are all the same. And we do not hesitate to move in and cut with them. This is what has happened as a nation… Everything has lost its value.”

Soyinka said that Nigeria needs to undergo a “brutal,” and “marathon”, soul-searching process in which “we call our names and tell ourselves truth without compromise.”

Soyinka travels internationally to promote his novel. He also keeps up a constant commentary, calling out successive leaders. However, he admits that he isn’t as strong as he thought.

He chuckled and said, “I’m really tired.” “I live a normal, everyday life.” There is no special recipe. Take each day as it comes.

He also gets tired of reading his own funeral obituaries. Fake news reports about Soyinka’s death in Nigeria are common on social media. The most recent was posted in mid-October. He stated that he had probably read more about his death than his own works.

He said, “I am becoming bored with dying,” and he flung his hands in the air as if he was giving up on life itself. It is not creative. It bores me every time I read the obituary. It has been going on for many years.