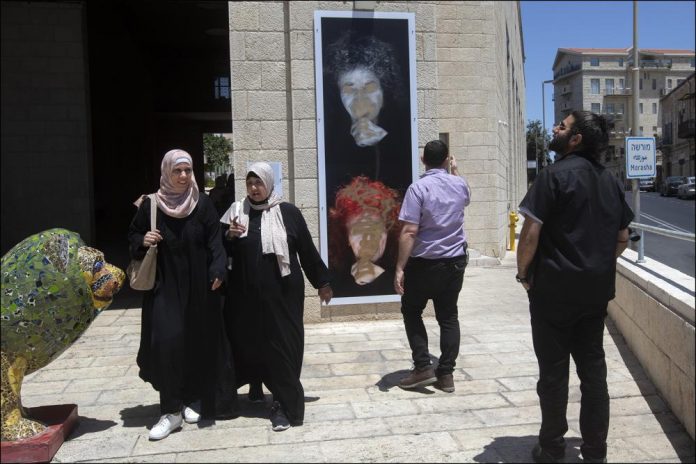 Peggy Parnass can be seen clearly from Jerusalem’s Old City walls, with her joyful glint. The twin images of Peggy Parnass, Holocaust survivor, and activist are posted across the street at City Hall’s gateway. They gaze out at the ancient city of holy monuments of Christianity and Judaism, as well as Islam.

Someone saw her image as a problem just outside of this center for spirituality. Since the April photos of Parnass were uploaded as part of an exhibit, vandals — widely thought to be ultra-Orthodox extremists – spray-painted her eyes and mouth five times.

Parnass smiled again after the graffiti was removed each time. The short-term solution was a temporary fix for many Israelis. However, it highlighted a familiar pattern, which is all the more painful due to the fact that the destruction is not coming from outside Israel but from within.

Jim Hollander, curator of The Lonka Project art installation in Safra Square, stated that “it’s not antisemitic.” “This is antifeminist.”

Israel’s modernity, military power, and high-tech knowhow have not been able to stop images of women being vandalized in public places for decades. Religious extremists have repeatedly destroyed and torn down billboards featuring women, including musicians and soccer players, in Jerusalem and other cities that have large ultra-Orthodox communities over the last 20 years.

Even Angela Merkel, German Chancellor, was removed from a photograph of Paris 2015 world leaders published by an ultra-Orthodox newspaper .

Fleur Hassan Nahoum, a Jerusalem deputy Mayor, said, “This isn’t Kabul, it is Jerusalem.” “This is a coordinated campaign of radicals to eradicate women from public space, which belongs all of us.”

On the outside wall of Jerusalem’s City Hall complex, Parnass’ double photo, which shows him as a 94-year old German citizen, is displayed.

Hollander stated that he chose the marquee spot from dozens available around the complex because it project vitality, perseverance, and survival across one Israel’s most iconic expanses. Its central position makes it easily visible to thousands of people every day.

A few fringe members of the ultra-Orthodox community are widely blamed for vandalism. This group emphasizes modesty among women, and has historically had a large influence on Israeli politics. This photo was taken next to an ultra-Orthodox street, which is also a popular route to the Old City’s Western Wall. It is the holiest Jewish prayer spot.

One expert warned that there is a distinction between ultra-Orthodox Judaism, which is more pragmatic, and vandals who deface photos of women.

Gilad Malach, the director of the ultra-Orthodox program in the Israel Democracy Institute, said, “In the main, they know that outside is functioning differently.” “And they understand that they must cooperate in certain situations.”

Some women in the Orthodox mainstream community have started to criticize social media.

Kerry Bar-Cohn (48), an Orthodox chiropractor who has started to post YouTube videos in which she sings children’s songs. She tried to put her photo in an ad in a local newspaper, but was turned down.

Bar-Cohn, the wife of a Rabbi and mother of four, said that it was discrimination. “I thought I wanted to sue them. But No. 1. Who has the time? And no. 2. You don’t want that person to be your friend.”

Shoshanna Keats Jaskoll (46) said, “You don’t see women. You don’t hear their needs. Their needs are not met.”

Keats Jaskoll launched the subscription-only Jewish Life Photo Bank. This is a collection of images that she describes as “positive” of Orthodox women, and it was recently published by the Chochmat Nashim organisation. It is intended to sell images of women that can be accepted by Orthodox audiences and are more easily understood by the general public.

These initiatives have not stopped the steady wave of vandalism.

The Israel Religious Action Center is a part of the liberal Reform movement of Judaism. It has been following vandalism and other attacks against women’s images over five years. They have filed a court petition asking the city to stop it.

The municipality responded over time by stating that it is committed to “massive effective and focused enforcement of the city’s vandalism bylaws.” However, it acknowledged difficulties in collecting evidence and prosecuting suspects.

The Jerusalem municipality condemned any damage to public image and dealt with the problem on the spot, the city stated in a statement.

Police claim they investigate all reports of vandalism or property damage and seek to locate those responsible. However, they have no information regarding the Parnass case.

Ori Narov, an attorney representing IRAC, stated that “the state sponsors” this practice by refusing to or being unable crack down. “We keep getting the impression that they keep making excuses,” which can range from a lack of labor to more restrictions due to coronavirus pandemic.

According to the municipality, Parnass photos were restored and increased patrols have been established around City Hall.

Keren-Or Peled is Parnass’ niece and lives in Israel. After the photos had been cleaned a third times, Peled went to Jerusalem to take a photograph to send to her aunt.

Peled arrived at the scene to find that the photos were already gone. It was cleaned by her.

In Haaretz, Peled wrote to her aunt: “They paint over you picture time and again because they are women.” “A confident, beautiful, strong, and confident woman of 94 years.”